For centuries, in the medical practices of India and southern Asia, the kundalini has been represented by a double-coiled snakes coursing up a single staff.

The double serpent on the staff is a representation of the kundalini coursing up the body, from the perineum and sacrum to the crown of the head. This symbol carries an important message to acupuncture/acupressure, chakra balancing and chiropractic.

Where the two snakes cross each other as they entwine, coiling up the body, represents the location of a chakra.

Chakras are the primary centers of energy in the body. The crossing of the serpents occurs seven times – The seven chakras.

The chakras have been described as the sources of where the qi energy, circulating throughout the meridian system, originates.

It takes air, food, water and sensory and intellectual stimuli to replenish qi. The chakras are responsible for meridian energy distribution; they are of incredible significance in healing, as they are the primary 'electromagnetic' energy system of the body.

The individual circular rotations of the chakras are associated with specific frequencies, measured through color and sound.

One of the most significant healing factors of chakras is simply the fact their electromagnetic energy is located not on the anterior of the body, as they are generally illustrated, but in the middle of the body. They also communicate to both the front and back: yin and yang.

* Each chakra has a particular relationship to a yin and yang coupled set of meridians (e.g., 5th chakra - CV 22 - BL/KI). 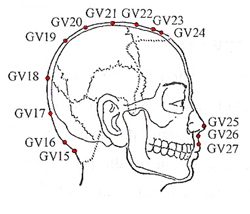 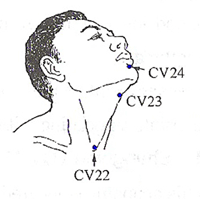 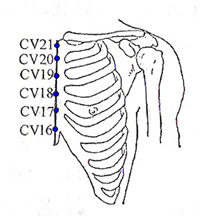 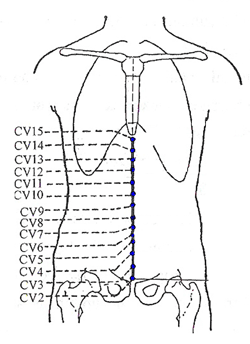 From 'Chakra Locations' back to 'Home Page'